The European asparagus season is still in its cultivation period, but there are already concerns in some countries about what to expect in the new year. Growers in Spain fear the rainfall over the winter will fall short, as they have only had less than half of what is needed for the asparagus cultivation. In Germany, growers are worried about the difficulties in obtaining seasonal labour from Eastern Europe. In other countries, the continued lack of space when it comes to air freight has hampered import seasons, particularly in South Africa, which does not produce enough asparagus domestically to meet the demand. Meanwhile, in the US, strong demand for the vegetable has provided growers with equally strong prices. 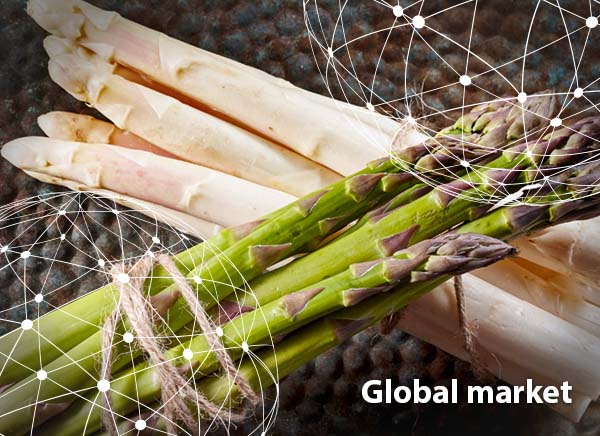 The Netherlands: "Besides green asparagus, tips and white imported asparagus are also increasingly in demand"
December always guarantees good asparagus sales, but for a Dutch exotic importer, the demand has really taken off this week. "We have quite a few promotions planned, so we go into the holiday season with confidence. Especially the asparagus tips - the top 15 cm of the normal green asparagus - are very popular this week."

What is also striking is that the number of asparagus transported by boat has also increased considerably. The main part of the asparagus import, however, is still done by air. "But the rates are sky-high now. There is even less air freight available in December than there already was because a lot of mangoes are now also being flown in from Peru."

The importer received the last product for 2021 from Mexico in early December and is now fully into the Peru season. "We have the usual rush for the holidays, but sales of import asparagus have been good all season. Besides the green asparagus, we also had a great season with white asparagus. We started this with various retailers throughout Europe and we will certainly continue this next year."

Germany: Green asparagus is gaining ground
German asparagus production has been professionalised for several years. As a local and seasonal product, the asparagus was one of the big winners from the COVID-19 crisis. Green asparagus in particular is gaining noticeably in direct sales. Despite the steady increase in acreage, experts see the climate as an obstacle to further growth in the long term. In view of the continuing COVID situation, it is feared that in the new season, which starts in mid-March, it will again be a challenge to obtain sufficient seasonal labour from Eastern Europe.

White asparagus, in particular, remains a domestic and seasonal business. Prior to the domestic season, asparagus from Greece and Spain, among others, are offered. Currently - during the winter - modest volumes of green asparagus from Peru are traded, but demand is limited, reports a trader.

Italy: Stable consumption of asparagus, but with rising prices
In Italy, the consumption of asparagus is highly seasonal. In autumn and winter, consumer demand is very low. An important buyer of an Italian large-scale distribution chain states that there is imported product on the shelves, at the moment, coming from Peru. The buyer buys it for 9 euros/kg and sells it for 11/12 euros. But consumption is very low. It could slightly increase around the Christmas holidays. However, Italian consumers are not accustomed to buying asparagus in winter.

According to statistics, 10.6 million Italian families bought asparagus in the last 12 months ending in October 2021. This corresponds to 40.7% of total Italian families, showing a slight increase (+0.2 points) compared to 2020. The frequency with which the category is purchased is not high: it is equal to 3.4 acts of purchase on average per family per year, a fairly stable figure in recent years.

Spain: Concerns about lack of rain during Spanish asparagus growing season
Spain is currently off season and importing green asparagus mainly from Peru. According to the biggest Spanish producer and importer, bringing asparagus from Peru is quite difficult and expensive at the moment due to the limited availability and high costs of the air freights. “Therefore, in just one week the prices of Peruvian asparagus went from USD $ 2,60 to $ 3,20.  The air space is also being used to import other fruit and vegetables, flowers and for passengers as well.”

The demand for air freight is high for the low availability. During November, Spain was importing from Mexico as well with reasonable prices, which alleviated the pressure on the market. Now the Mexican season is coming to a close and volumes are smaller and more expensive, due to the high demand from the US. In Europe, countries like Germany or France have a very seasonal consumption, but the demand remains stable all year round in countries such Spain and the UK, and it grows during Christmas and Easter time. According to the importer, the consumption in Portugal has grown significantly this year and this country is becoming a year-round consumer as well. That’s why, in these countries the consumers are still buying asparagus despite the higher costs at the moment. “Asparagus consumers in Spain, the UK or Portugal are very loyal in spite of the prices,” says the importer.

Granada, the main asparagus growing area in Spain, will kick off its harvest around March, but the sector keeps looking to the sky longing for rains. The drought makes the coming season very uncertain, as farms had only around 100 ml per m2 and they still need 150 ml more to complete the growing period. Other products like olives are already facing serious difficulties in their harvests.

South Africa: Difficult domestic and import season for asparagus in South Africa
There was a slightly later start to the South African asparagus season by about a week, but warmer spring temperatures saw the asparagus production peak come through slightly earlier as well, towards the end of September towards the first week in October. It’s generally been a good season with high rainfall.

At the moment production is low, but growers will bring in volumes in time for Christmas.

It has been a bad year for asparagus both locally and for imports, according to a retail buyer.

Locally, because there are so few asparagus growers in South Africa “and we can’t get the volumes we need”, she says. Imports have been difficult because of exchange rates and air freight delays caused by the pandemic.

An asparagus grower said there seems to be lower production in Central and South America. “What we are finding is that there is very little purple asparagus available worldwide as well, so we haven’t been able to import in any purple asparagus.”

At times retailers get queries from customers about white asparagus, which is imported 12 months of the year as no one in South Africa grows it anymore. Since restaurants have been allowed to open again there has definitely been an up-take in sales.

Pricing has remained fairly consistent throughout the year with only small increases. Erratic supply has affected consumer demand.

He also notes that there are a lot of growing regions coming into production over the course of the next two weeks. However, organic asparagus is currently in a lighter production cycle, as expected. “We’re pretty much where we expected to be. We have Baja finishing and Caborca sputtering to life out of Mexico,” says one organic shipper. “We’ll start to see more production here after the first of the year. Generally we anticipate having decent supplies available as soon as the middle of January.”

Meanwhile demand is strong for both conventional and organic asparagus. “We need more asparagus than we can get. It’s the same story as the end of last year and beginning of this year,” says the organic shipper.

Cooler temperatures and holidays have helped with conventional demand. “There’s been a lot of holiday promotional activity and just good interest and activity for cooking vegetables. The weather changing has put it more plates and I also attribute it to retail promotions,” says the conventional shipper.

All of this leaves pricing strong on organic asparagus in the range of $30- low $40s, a range that will likely come down as organic productions ramps up.

For conventional asparagus, pricing rose quite rapidly over the past couple of weeks and is between $26-$30 on an 11 lb. FOB in the desert. “It’s a good money-making level for growers and it’s at a good level in which the retailers can still continue to promote and do some good things in the produce departments with the product,” the conventional shipper says.

He does note that historically the market has gotten a lot higher, between $30-$50, during this time frame due to factors such as weather. However, he doesn’t anticipate seeing that level of pricing this year given the amount of production coming.

Next week we will be taking a break over the festive season!
Join us on January 6, 2022 for Global Blueberries!