Raspberries, blackberries and red currants continue to grow in popularity in most countries, with red currants lagging slightly behind the other two berries in some places. In South Africa, the growing interest in blueberries has increased the popularity of the segment as a whole, with raspberries and blackberries in particular seeing benefit from this. Heavy rains during the growing seasons in Mexico and Australia have had some effects on the volume and quality of berries, although the damage in Australia has been limited due to the protection of covered cultivation. 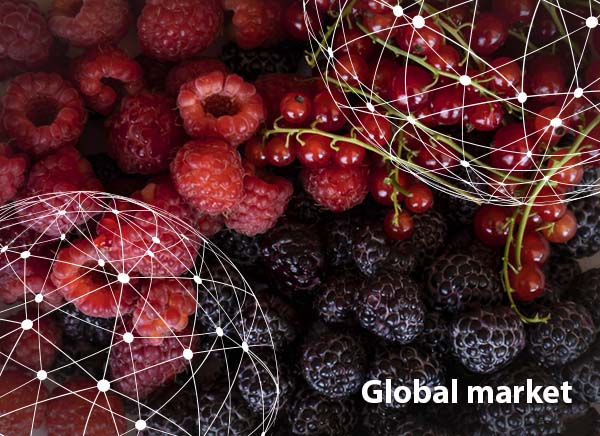 Netherlands: Balanced market for raspberries, blackberries extremely expensive
"With raspberries, the season in our Portuguese farms is already coming to an end. A few weeks ago, we started with direct deliveries from Morocco to the United Kingdom and have now also started elsewhere in Europe. Sales are running well. The supply is not extremely high during this period, but neither is the demand, so the market is in good balance. Prices are around 8.50 - 9 euros per kilo. The expectation is that the supply will increase again in the coming weeks, so hopefully the demand will too," says a Dutch trader. The sales of blackberries are currently the most difficult for him. "Normally, during these weeks, the bulk of the supply comes from Mexico. However, most of that fruit comes along with the commercial passenger flights and that number is not even half of what it used to be. This has resulted in extremely expensive blackberries, with prices between 12 and 16 dollars per kilo. In fact, the United States and Asia are also on the fence, so availability remains limited for now."

"The demand for red currants is not as strong as in other years, in my opinion. Prices are around EUR 6-6.50 per kilo. Germany and Italy are our biggest markets for red currants. Traditionally, demand will increase somewhat in January and February."

Italy: Purchases of berries increasing in Italy
According to statistics, the popularity of certain berries shows strong growth, with 7.5 million households purchasing them in the last year, up + 22% over last year and + 26% over 2 years ago. In particular, blackberries, raspberries and currants were bought by almost 4.6 million families in the last year ending in October 2021 and therefore, despite the strong growth, they still have significant development potential.

Blackberries are purchased by around 1.7 million households and are relatively more stable over time. Raspberries are the most widespread type with over 3.2 million household buyers in the year ending October 2021, with a + 24% compared to two years ago. Currants, on the other hand, are still a relatively rare type, with about 1.3 million families buying them, but this number is almost double compared to two years ago.

According to reports, raspberries, blackberries and currants are three items that are achieving excellent sales results in Italian supermarkets. This is confirmed by a buyer from one of the main chains. Sales increased in 2021 to 2020 by 10%. Even in November, despite a generalized decline in fruit and vegetable sales, these items held up well. Prices are also high on average, between 12 and 14 € / kg, at the moment, also because the lack of Italian and European offer. The market players are hoping that this trend will continue in the coming weeks, when, with the Christmas holidays, there will be a further increase in requests.

On the packaging front, transparent trays are highly sought after, which allow the product to be seen clearly. The weights for raspberries range from 125 to 250 grams, but lately the smaller 125 is preferred because raspberries spoil less and the price (for the single with packaging) is lower. For blackberries and currants, on the other hand, the weight of 125 is always the most present.

As for the origins, blackberries are mostly imported from Mexico. Raspberries come from Italy, Spain and Morocco, while the red currants are almost always Italian.

Spain: Pressure on Spanish berries from Moroccan competition
In 2020, Spain ranked second in the ranking of raspberry producers in the EU-27, with a total of 25.43%. 99% of Spanish production comes from Andalusia, mainly from the province of Huelva and it is mostly exported. Currently the cultivation of raspberries takes place almost all year round, thanks to the overlapping of different remontant (producing a crop more than once a season) and non-remontant varieties, but between March and May the production peaks.

According to a Spanish trader, sales were going well up until two weeks ago, when the competition from Morocco began to grow significantly. The increase of COVID-19 outbreaks in Europe and further restrictions is also having negative effects on raspberry sales, as the hotel, restaurant and catering customers suffer from further closures.

Raspberry exports have grown over the past few years and there are trials underway of new raspberries varieties. There are fewer than ten raspberry producers in South Africa, many of them at the coast, some on the Highveld.

North America: Rainy season in Mexico affects volume and quality of berries in North America
Volumes of raspberries are strong. One shipper says raspberries are coming from two regions currently: central Mexico, which began in late August-early September and more recently Baja California. “We will have decent volumes by the middle of December,” she says.

She does note that Central Mexico saw steady, persistent rains in the fall. “It definitely took its toll on all of the berries in Mexico unfortunately. It’s made for less volume and a later start in terms of volume as well. But product is available,” says the shipper.

Meanwhile, demand for berries has been excellent, particularly for a new variety the shipper is working with, the Malu raspberry. “It has a very good size and color and even though it has a good size, it is quite firm. It also has an excellent shelf life and it gets very sweet with a touch of acidity. There’s a lot of work in varietal development in raspberries.”

They note that growers in both regions have the Malu, though Baja California growers will have other varieties as well. “With the two regions coming together in the winter months, we’ll have extremely good quantities from the middle of January through the end of February. The Malu itself will also have peak quantities during that time period, in time for Valentine’s Day,” they say.

Overall demand also feels stronger than last year. “It has been a strong fall and raspberries always move well around the holidays, especially for New Year’s. And then January and February are fabulous months--people are eating healthy and berries are such a good fit because they have so many health benefits,” says the shipper.

As for pricing it has been firm and is anticipated to get firmer as Christmas and New Year’s Eve get closer.

Supplies of blackberries from Mexico are steady but not particularly plentiful.

Another shipper says their blackberry supplies are largely the Tupi variety currently and coming from Michoacán. “We’re seeing a more stable season compared to last season. But supply is not as abundant and the quality of Tupi could have some shortcomings. We’re expecting it to be like that the whole season.”

The Tupi is the dominant variety of blackberry that’s been in place for at least 15 years. “It was a great variety in terms of quality many years ago but because of the industry and how it’s treated it, it is now in bad shape,” he says.

Also adding to quality concerns on blackberries is that extended rainy season in Mexico. “Usually the rain finishes by the end of September the beginning of October and it went to the end of October. So it affected not only blackberries but many other berries and crops,” says the shipper.

The start of the season also saw a slight shift. “Last season we had a heavy frost that affected around 800 hectares of berries in Michoacán,” he says, noting that the season started approximately four weeks early this year in early September.

At the same time, the company is working with its newer variety, the Sultana which has begun harvesting already. “Production is limited right now but we expect within four to five weeks to harvest a lot more,” says the shipper. “In an ideal world, we would like to ship Sultana only but it takes time to develop the farms. There’s not enough fruit to fill the shelves right now so it will be a mix,” he says, noting that the variety promises a good shelf life and good eating experience for consumers.

And on pricing, a healthy market is expected given there is less fruit in comparison to previous seasons.

Red currants have limited production in the U.S. If purchased, they are often bought fresh by Europeans in the country, but are otherwise processed into jams and jellies.

Australia: Covered production saves Australian raspberries from worst effects of rain
A leading Australian fruit producer is expecting plenty of its quality raspberries to be on retail shelves this summer, as two of its growing locations recently came online in November. They are currently finishing off the winter-spring program in Wamuran, near Queensland's Sunshine Coast, which is winding down in its final month, as other production areas begin to ramp up. Stanthorpe (in Southern Queensland) and Tasmania started three weeks ago - so for a couple of weeks, there will be all three of the company's sites going nationwide, until mid-December. Although the Stanthorpe region has been pretty wet after heavy rain over the past two months, all of the raspberries are covered, so the rain itself hasn't impacted fruit quality. However, the humidity has been up, so it's been harder from a growing perspective to control fungal diseases.

As a category, production data is collected under "Rubus", which include raspberries, blackberries, and other berries (such as boysenberries and silvanberries). These berries have been on a year-on-year increase in terms of volumes produced since 2018. The most recent data for the year ending June 2020, there were 9,932 tonnes produced, according to statistics, of which 7,404 tonnes of that volume were raspberries, 2,483 tonnes were blackberries and 45 tonnes were other berries. Rubus berry production was valued at $ 216 million, which was a four per cent increase from the year before.