It has often been said that the fresh produce industry has been slow to modernise and adapt to new situations, but is that now changing? The whole industry is being forced to look at new ways of operating, whether that is at the point of harvesting, sorting, packing or selling.

When buying or selling fresh produce traders need to be able to react quickly and also there must be security and trust between the parties. A new trading platform FruPro, which is just about to be launched hopes to do just that. 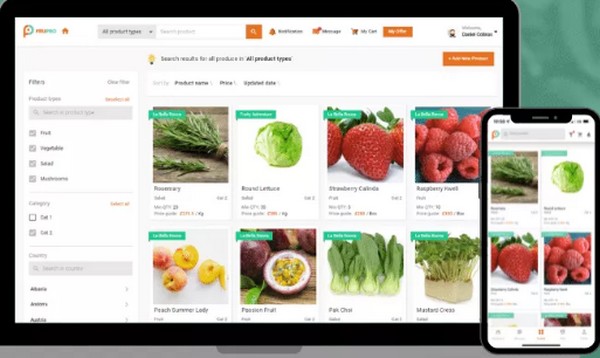 “We have created a digital marketplace where everyone present has a profile, can communicate and trade with each other,” explains Will Hill CEO and Founder of FruPro. “At the moment trading can be a slow and now and then a risky process, by using FruPro members can see right away if they should go through with the deal. Sellers can see a full financial background of the buyers, VAT number, HRMC registration, full company address etc.”

Unique messaging system
“A lot of trade is done on messaging apps, such as What’s App, but this is not a legal record of a transaction. We have created our own messaging system which has all the same functions but is compliant and will be a full record of the conversation.”

FruPro uses Open Banking which is 100% secured and very efficient with no hidden costs or contracts.

At the moment the platform is in the testing stages with some growers, wholesalers, service providers and a few independent retailers on board. It will have a soft launch in December to build the number of companies involved to reach a capacity of 50 before the main launch in around mid-February.

“As more companies join the platform we will be able to introduce more services such as logistics. This will then help optimise routes and consolidate loads. We are user focussed and will listen closely to user feedback.”

At the moment it is mainly UK companies on the platform and it is only in English, but looking to the future, Will plans to include European companies and make the platform available in other languages and eventually become a platform for global trade.

“A very important part of this project has been to reduce waste by distributing it back into the supply chain. FruPro are working together with Fair Share a charity which works to reduce food poverty and food waste.  Any produce which would be heading for waste can be redirected to Fair Share and given to those who need it. This can also benefit companies on FruPro as they will receive an impact report which will be included in their company profile and add to their corporate responsibility.

“It is extremely important that we redirect this food and it is very pleasing to be able to do it.”