The global pineapple market is hugely variable depending on location this year, with the exotic fruit faring much much better in some countries compared to others. Although production country Taiwan has been banned from exporting their pineapples to China, this has led to a huge increase in their sales to Japan and Hong Kong. In South Africa, the lower purchasing power of consumers this year has led to a decrease in sales, whilst in the Netherlands the usual Christmas boost may be lacking this season. Meanwhile in the Americas, higher production and logistical costs may mean a significant increase in prices in the future. 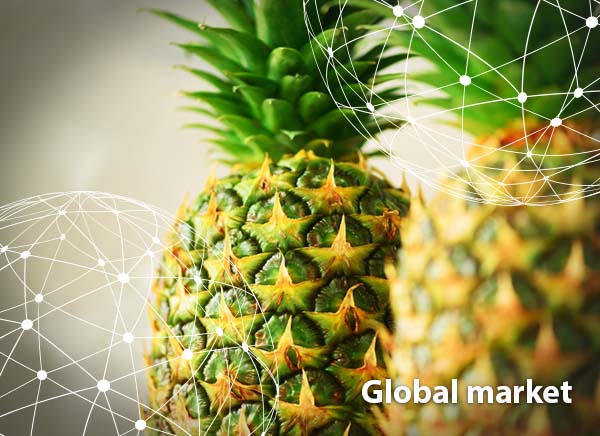 Netherlands: Disappointing pineapple sales in traditionally quiet November month
"The customers don't want it right now. Sales are very disappointing in both the retail and the free market", sighs a Dutch pineapple importer. "Actually, there is not much to say about the pineapple market. It's quiet, there's not much coming in and prices can't really be raised. November is never a busy pineapple month, but I don't foresee a revival in the coming weeks either. The days when you got pre-orders for Christmas are over."

The commercial penetration of fresh-cut pineapple is growing: up to two years ago it was only 2.5%, while today it reaches 4.3%. Online purchases have also doubled: 6% of Italian families have bought pineapples online at least once (this number was half two years ago).

In fruit juices, the pineapple flavor is the sixth in the penetration ranking (after ACE, peach, pear, apricot and orange) with over 4.3 million purchasing families (16.6% of Italian families), an increase compared to past years.

Pineapple is imported to Italy by sea or by air. Pineapple by sea recorded an average price, throughout 2021, of 1.20 euro / kg wholesale, in Milan. Here, the average price of pineapple imported via area is 3.50 euros / kg.

The product that arrives in Italy by air had a good market share until a few years ago, after having established itself in supermarkets, restaurants and specialized retail fruit and grocers. Lately, however, this product has returned to a niche in the market, due to the arrival of a new item that is transported by ship: pineapple ripened on the vine.

The import of pineapples by air takes place all year round, with various origins: Panama where the best quality is found in the months from April to January, then from the end of October the importation resumes from the Dominican Republic, which produces a prime level pineapple. The peak of pineapple imports in Italy is the month of December, when it is also imported from Ghana.

The main variety, at a global level, is the MD2, which has a very yellow flesh and a sweeter flavor than the Smooth Cayenne variety, which has been almost completely abandoned.

South Africa: Restrained consumer spending detrimental to South African pineapple market
Local pineapple production is year-round from the Eastern Cape and KwaZulu-Natal, with volumes picking up this time of the year.

However, a producer says consumer demand for pineapples are down to pre-COVID levels (there was a pineapple frenzy last year for brewing purposes when alcohol was banned as per COVID lockdown restrictions) because it’s a niche fruit and consumer spending is restrained in an economy under pressure.

Pineapple exports, mostly by air, are still severely depressed. South Africa has in the recent past exported pineapples to the Middle East, Europe, UK, Canada, the USA and Indian Ocean islands. A lack of flights as a result of the suspension of international travel and tourism has been detrimental to air freight opportunities.

The average market price is R7.65 (0.4 euro) for pineapples, down from the previous week.

Taiwan: Huge increases in Taiwanese pineapple exports to Hong Kong and Japan as result of Chinese ban
The import of pineapples from Taiwan to China was suspended from March 1, 2021. Mainland China is Taiwan's largest export destination, accounting for more than 90% of its exports. Over the past few months, the proportion of Taiwan’s pineapple exports has changed. Taiwan’s second and third largest export destinations of pineapples, Japan and Hong Kong, have seen their imports increase several times over.

China: Chinese pineapple prices rise following banning of imports of Taiwanese fruit
Banning Taiwanese pineapples made mainland domestic pineapples very popular. At the moment, Zhanjiang Xuwen is ushering in their busiest planting season. This year, Xu Wen’s field purchase price for pineapples is generally 1.8-2.5 yuan/500 gram, with the highest price reaching 3 yuan, which has doubled from last year’s highest price of 1.5 yuan and is the highest price in 30 years. The quality of Xuwen's pineapples this year is better than in previous years, and the good quality has been sold at a good price, which has led to a general increase in the income of fruit farmers.

North America: New price levels expected for pineapples due to higher material costs
The volume of pineapples is approximately 10 percent higher than this time last year.

“This is good since several retailers have invested in promoting the category to keep sales at the level the pandemic has increased them to,” says one grower who grows its pineapples in Costa Rica.

The increase is attributed to a few reasons--first, the volume in the industry is concentrated in larger, more technical operations. “Also, the weather conditions have been exceptionally good for pineapples. These factors have positively impacted overall productivity levels which means that the availability of larger pineapples have increased vs. the small and medium sizes.”

Supplies continue to come from dominant producing country Costa Rica--it supplies approximately 90 percent of the pineapples consumed in the U.S. and Europe. “Mexico exports some pineapples into the U.S. but they mainly stay in the Texas area,” adds the grower.

The grower notes that it plans greater availability in November annually to cover the increased demand around the holiday season--particularly in Europe. However the U.S. remains its largest market. “We expect that consumption will increase as has the consumption of avocados and other fruits that consumers recognize as highly nutritious,” says the grower, adding that several retailers have turned to promoting the health benefits of pineapples and recipes to educate consumers.

Meanwhile, prices in Costa Rica have increased due largely to the increase in input costs such as cardboard, agro chemicals and more. “And the worldwide disruption in the supply chain affects importing our production supplies. This trend will continue into the New Year and it’s not only affecting the pineapple industry but the entire consumer market.”

“We are working closely with our partners to try and mitigate these rising costs and to keep the business sustainable,” says the grower. “Although cost increases are significant and an unavoidable reality, we have found ways to mitigate through partnering with customers to find operational efficiencies which limit the impact to customers and ultimately to the consumer.”

The grower adds that this is also the time of year when pricing for the following year is established with retailers and program customers. “However this year we have a completely different context with higher operational and logistics costs,” they say. “We expect that in this process, a new price level for pineapples will be set. This is key for companies like ours that are invested in the production and committed to maintaining our quality and service level.”

Australia: Positive outlook for Australian pineapple season, but fears that challenging weather could muddy waters
A major Australian producer is gearing up for their busiest time of the year in terms of pineapple production, to meet the spike in demand over summer. While the company produces the fruit all year round, their managing director noted that it has been a mild spring, weather-wise, in their North Queensland production region of Mareeba, which has led to some good signs. He says: "Fruit size is looking positive right through until January. Summer pineapples are always of a good eating quality and in the nice warm humid weather they really turn it on from a flavour perspective. It's looking like a solid pineapple harvest for us, but generally we do try to maintain a steady supply as consumers don't like too may peaks or troughs." He does note however, that it could be a challenging few months with weather, as several storms and possibly even a cyclone are forecast throughout the summer months for North Queensland. That could pose both harvesting and transport logistics issues, especially if roads and highways are cut by flooding.