VOEN Vöhringer Ltd & Co. presents a revolutionary winter solution for its canopy systems for stone and soft fruit at expoSE 2021. VOEN Winterization 2.0 reduces the time needed to open VOEN films before the season and winterize them again after the season by more than 50%. "This means a significant reduction in labor costs and puts VOEN in a leading position when it comes to profitability & labor efficiency of canopies," Rainer Weiß explains.

VOEN has been one of the leading suppliers of films and roofing solutions for decades / Image: VOEN

Positive influence on night temperature
VOEN winterization 2.0 can be combined with the unique zipper system, which contributes to improved efficiency. In addition, the zipper makes VOEN canopies 100% insect and bird proof. Weiß: "With increasing cherry vinegar fly problems in berries and stone fruit, the zipper is the preferred option for most growers to efficiently close the canopy."

The new system allows growers to quickly open VOEN films during late spring frosts. "In recent years, there have been more and more critical frost events where VOEN film canopies have a positive impact on nighttime temperatures," Weiß said. 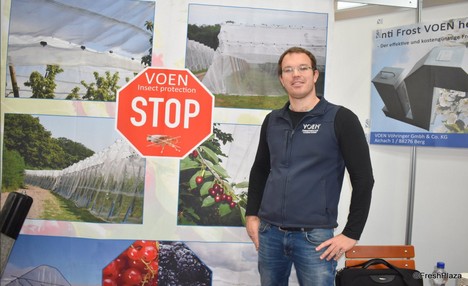 Easier to operate with stable heating performance
To further increase the temperature, VOEN AntiFrost heaters can be installed under the foil canopies. After its successful introduction 4 years ago, the AntiFrost heater has been revised ahead of the 2022 season. According to Weiß "It is now made of one piece, and the design of the product has been revised. This makes it much easier to use, while the heating capacity remains the same."

The frost protection ovens can be installed in foil tunnels, under canopies or in open fields and are used primarily for berry, stone fruit and wine grapes. "They are fired with wood pellets, making them a sustainable solution for frost protection," Weiß concludes.