Lena Trautwein from Llombart on the Spanish persimmon season:

"The predominant variety is still the Rojo Brillante"

October is not only the time for pumpkins and mushrooms, but also for a new season, full of of Spanish persimmons. Llombart Handels- und Treuhandgesellschaft is a "persimmon trader from the very beginning" and has been working with producers from the Spanish provinces of Valencia, Murcia and Huelva for many years. We spoke with Lena Trautwein, who herself has been in charge of sales regarding persimmons for over ten years, talking about the difficult conditions for the fruit this year, as well as the predominant variety. 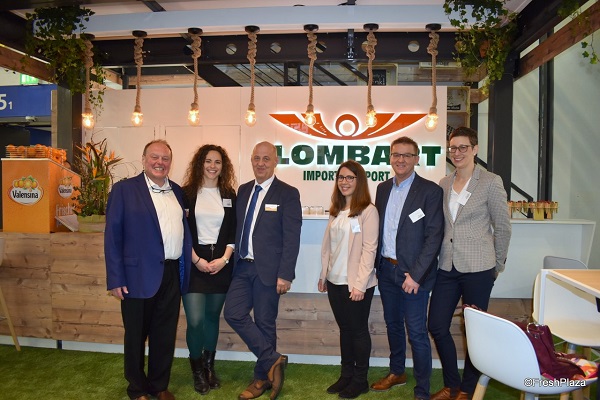 Lena Trautwein (far right in the picture) with some of her colleagues at Fruit Logistica 2019.

Good taste, less produce
"At the start of the season, the coloring was not yet optimal, which meant a lot of sorting work for suppliers. Since then, the color is steadily improving. In terms of taste, the produce is very good already. It becomes clear that there is less produce than last year," says Lena Trautwein.

Difficult circumstances for delivery and cultivation
What is striking, or rather special for this season, are the more difficult conditions for suppliers: "There are problems due to pest infestations on several plantations. On the one hand, these are caused by the ban on effective pesticides, for which there are only a few high-priced alternatives. And on the other hand, they are the result of poor sales yields in recent years. Particularly in November, when traditionally many persimmon commercials are around, prices have been pushed below the level of production costs by retailers. As a result, many growers are no longer financially able to treat their plantations effectively against the mealybug. This has allowed the pest to spread more and more in recent years, now threatening a significant portion of the crop."

Problems with severe weather and rising costs
Capricious weather, rising costs and a lack of concessions from the trade also created additional burdens, says Trautwein: "The growing areas south of Valencia in particular have been the victims of hail and windstorms, which have led to considerable losses. Ancillary costs for gas for the ripening chambers, as well as electricity and packaging materials, have increased significantly. Although these circumstances are well known, growers are complaining that they have not felt any change in the purchasing behavior of retailers so far. Rather, the opposite is the case. The price pressures between parties is enormous."

Rojo Brillante remains popular
As before, the predominant variety is the Rojo Brillante. However, research is also being conducted on new varieties that ripen earlier than the Rojo Brillante. "The persimmon is a fruit that enjoys great popularity. It is sweet and fruity and has great potential. The fan base is growing steadily and there are still consumers who don't know about them and who can still be reached." Persimmons are offered primarily in bulk by Llombart, although there are also customers who purchase 1-kg trays. Among Llombart's main customers there are both food retailers and wholesalers.