Mexico tops the world rankings for avocado production and exports, and official figures, on a steady rise, confirm its leadership. According to SIAP data, the acreage amounted to almost 250,000 hectares as of July 2021, which is 2.9% more than in the same period of 2020, and production reached 1,403,119 tons; a volume 10.3% greater than that recorded in the same month of the previous year. This corroborates the forecast that this year, the country will achieve a new all-time high in the fruit's export. Michoacán, with 70.5% of Mexico's avocado-growing area and a share of 81.3% of the national production in the first seven months of the year, is consolidating its position as the epicenter of avocado production in the country.

The volume of business generated by the avocado industry throughout the entire chain is exceptional and the United States is, by far, the main destination for the Mexican fruit, receiving 79.9% of the national total exported until August 2021.

For the past 3 years, the more than 30,000 avocado producers in the State have had a new digital tool for the direct marketing of their production: AvoPRICE. According to founder José Humberto Solórzano Mendoza, this platform allows direct, efficient and transparent connections to be made between producers/packers and exporters, as well as between exporters and importers. 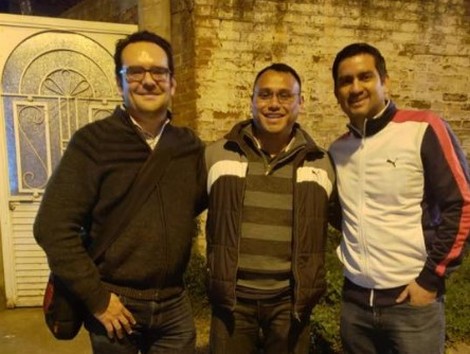 Pedro Toral was the first avocado grower to put its trust in the system.

"The idea of founding AvoPRICE came in 2018 after successive strikes carried out by the sector in Michoacán due to the low prices paid at origin. As a third-generation avocado producer, I decided to undertake a project that would take the growers into account and allow them to increase the profitability of their activity. It would benefit them, but also every other link in the distribution chain thanks to direct and reliable contact and information," says José Humberto. 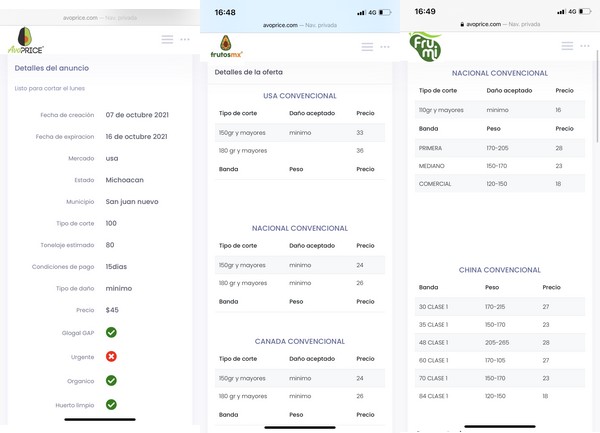 Images of the producer's system.

"In the first phase of the project, we gave producers and exporters in Mexico access to AvoPRICE's digital platform: AvoEXCHANGE, to allow them to share price information among themselves. In this way, producers, who until then had been at the mercy of intermediaries, had access to all the information for the first time, and could also be part of it," says the entrepreneur. "In this second phase, we have managed to connect producers and packers with the rest of the links in the chain, thereby building a digital bridge between Mexican exporters and U.S. importers." 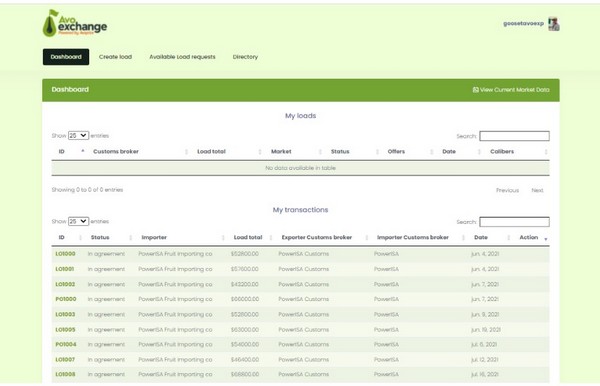 The system operates by user, exporter and importer types.

"More than 1,200 avocado producers from Michoacán and 20 packers are part of AvoPRICE right now and have thus the opportunity to work with the US market. Through the platform, operations can be closed in real time, and the fruit inspection processes are included in the procedures that we are digitalizing. These can be carried out both at origin and destination."

If a transaction is accepted, it is generated in the system. The first step is the signing of a digital contract.

"The connection with the United States is fully developed, so it may be time to reproduce this digitalization of processes with other fruits and vegetables, or even with other markets, such as Europe," says José Humberto Solórzano. "However, a working methodology still needs to be developed on the Mexican side for the export of avocados to Europe," he says.

"Our goal is to connect every link in the chain from various sectors through information management, so that everyone, from the producer to the importer, can participate on equal terms and ensure there is a more transparent market with equal opportunities for everyone involved," says the founder of AvoPRICE.