The exotic papaya fruit continues to increase in popularity in many countries, but for still remains a niche fruit among consumers. Despite this, the increased demand has led to a rise in prices and sales, as well as production in countries such as South Africa and Australia. Logistical issues, including the high costs of freight transport across the globe continue to hamper the export of this fruit as they do many others, but on the whole papayas seem to be enjoying a positive season. 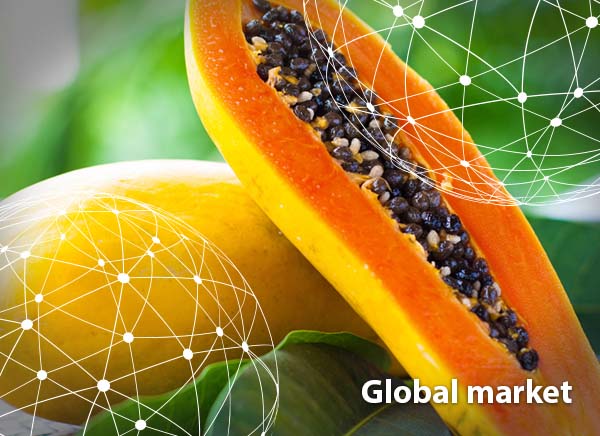 The Netherlands: Papaya prices on the rise
The prices of Formosa papaya on the Dutch market are currently rising somewhat, also due to increased costs in production, packaging and labour. The supply from Brazil is still limited and, according to importers, this will continue to be difficult in the coming period. Because of the increased costs, a price of 14/15 euros is necessary according to importers. The market for Golden Papayas is developing steadily.

The trader also says that although papayas are also supplied to the hotel and catering industry, there is not much demand from this area because papayas are too expensive for this sector. Above all, he says, gastronomy tends to focus on cheaper hand-held fruit, such as nectarines, mirabelles, apples, etc. In contrast, weekly markets and delicatessens are the main buyers of this product.

The trader offers papayas all year round and for 5 Euro per kilo. The qualities are good, large fluctuations have also not been observed. Besides Brazil, the company also purchases papayas from Peru, Mexico, Ghana and South Africa.

Italy: Retailers are the main channels for papaya sales
In the last year ending in July, the GfK Consumer Panel found 637,000 household buyers of papaya, equal to 2.4% of all Italian households. Papaya is therefore still a niche product, but one experiencing strong growth: + 5.7% compared to last year and +21% compared to two years ago. Most of the product is sold at variable weights (567,000 household buyers), with currently only 93,000 households purchasing the pre-packaged product.

Papaya has penetrated further into the modern distribution channels: 79% of households buy papaya in supermarkets, 9.9% in hypermarkets. In line with the general development of the channel, discount is the leader in the category, with 21% of total household buyers purchasing papaya in this channel, a growth of + 53% compared to last year.

The purchasing of papaya is currently done on the odd occasion by households, who on average buy the category just under twice a year. However, the category guarantees a good average cash flow, equal to € 2.88 per purchase. In terms of the type of household buying the fruit, it is interesting to note that papaya is less present in younger households under 34 (7.6% of buyer households, Index 96), finding more approval in mature households without children.

An operator in a wholesale market in northern Italy confirms that almost all the papaya consumed in the country is being sold through large-scale distribution, while traditional small-scale retail does not sell as much papaya. In general, papaya consumption is stable, only the dominant sales channel is changing. On the wholesale market, good quality papaya is sold between 3 and 3.5 Euro / kg at the end of September 2021. Compared to a few years ago, however, it is a product that has lost some appeal as consumers also turn to other exotic fruits.

A wholesaler in Milan is importing Formosa papayas from Brazil. He says: "Fewer and lower quality fruits are arriving at this time of year, despite the fact that market demand is rising sharply. A new trend that we are experiencing this year, compared to previous seasons, is the increased demand for green papaya with white flesh. It is not as well known yet, but we have increased the sales volume. At the moment, it has Sicilian, Moroccan and Spanish origins, and is mainly used as an ingredient in salads. It is still a product that is sold primarily on the ethnic market.

After a steady performance in the summer months, also due to the presence of seasonal fruits such as stone fruits, it is now a bit of a difficult time for papaya. Other fruits have left the market, consumption and demand for papaya have recovered, quantities are more limited but quality is lacking. This situation plays a role in prices: people are trying to obtain more attractive prices than in the summer season.

South Africa: Large volumes but low prices for South African papayas
This time of the year is a major papaya cropping period in South Africa, starting from September to November, tapering off from December until March. Papayas are supplied year-round to the market with two peaks.

It’s been a good season, stable prices which are better than last year, says a papaya grower in the Lowveld, one of the few areas with a suitable climate to grow papayas.

Another grower, also in the Mpumalanga Lowveld, notes: “The season is going well, we’re picking a lot. At the moment it’s difficult to stay ahead, there’s so much fruit.”

Hospitality and tourism closures have had a big impact on papayas, particularly on the large varieties. It is not a fruit much traded in the informal sector because of its vulnerability and limited shelf life.

The papaya industry remains very stable in terms of hectares and growers; the climate restricts its production.

China: Sales increasing but papaya remains a niche fruit
In China, papaya is grown mainly in Jiangsu, Henan, Shandong, Anhui, Zhejiang, Hebei, Jiangxi, but the overall planting area is far smaller compared with other fruit categories. The harvest season of papaya is between September and October.

In China, papaya is not a very popular type of fruit, and it is not very often available in every store. The consumer group of papaya has been relatively small but stable, mainly those who focus on fitness and healthy eating.

People in the Yangtze River Delta like to consume papaya more. The sales volume of papaya is increasing year by year.

Most imported papayas in the domestic market come from the Philippines. However, due to the tight global shipping capacity and the inconvenience of shipping this year, the volume of imported papaya on the market has declined compared with previous years.

The Philippine non-GMO papaya of the Dole brand is a relatively common and well-known papaya variety in China. Currently, the retail price of Dole papaya in the market is about 15 yuan per piece (380g), and this price has dropped from last year.

North America: Supplies of papayas in North America have been tight for almost six months now
One North American papaya shipper notes that growers have been getting hit with some bad weather in Mexico and lost a lot of fruit. “They had a hurricane down there so they were dealing with heavy winds. The trees were actually blown down,” he says.

Currently papaya supplies are coming from southern Mexican regions such as Michoacán and Jalisco, though some supplies are also coming out of Vera Cruz and more likely to pass through Texas into the U.S. “I haven’t heard of anyone else shipping. If they had them, I’m sure they’d be shipping because the market is really good right now,” says the shipper. “Usually at this time there’s some fruit available out of Guatemala and the Central American countries down there, but I haven’t heard of any.”

He adds that the quality and sizing though haven’t been affected on papayas following the inclement weather.

As for demand, it’s on the stronger side for papayas. “At this time of year demand is usually pretty good, especially when the market gets a little tight like it is now,” says the shipper. “The only bad thing is we haven’t been able to promote, or you can, but not aggressively. It’s a Catch-22 because you may not have enough fruit to cover that promotion.”

Looking ahead, tight supplies may continue for the near future. “They’re telling us that October is going to be the same and supplies may stay like this going into November. I think the price will be steady though,” says the shipper.

Guatemala: High logistical costs prevent export of papaya
Production is high, especially in the Northern part of the country. There have been a lot of rains in Central America in general, but there should still be enough papaya available. However, it’s near impossible to export the product to Europe due to high logistical costs for airfreight.

Australia: Australian papaya volumes up 32 per cent
The Australian papaya season has been ramping up since the start of spring, with a grower reporting ample volumes and great quality fruit in-store thanks to warm winter conditions. "Supply of the fruit will increase from September, and consumers can expect steady volumes right through to November”. They hope that the health benefits of the fruit will help drive sales through, not only through the COVID-19 pandemic but in general, given its "powerful antioxidant status and immunity benefits". As an industry production bounced back significantly in the year ending June 2020, according to the latest statistics. After dropping eight per cent the year before, volumes were up by 32 per cent to 19,648 tonnes, with a value of $31.8million (a 15 per cent increase). Only a very small number of exports were recorded, around 10 tonnes, mainly to Brunei and Singapore. At the same time, 86 tonnes were imported, predominantly from Fiji.