Weather and logistical issues are a common theme across the global onion market, affecting quality and price in multiple countries. Heavy rain and humidity during the South African growing season early in the year has flooded the market with onions of less than desirable quality, whilst the extreme summer heatwaves across much of North America has reduced the size of the harvest. Meanwhile, in Europe, the Dutch onion export is limited by a lack of logistical options rather than quality or quantity issues, and prices in the UK are on the rise in line with increased input costs, which are not expected to go down any time soon. 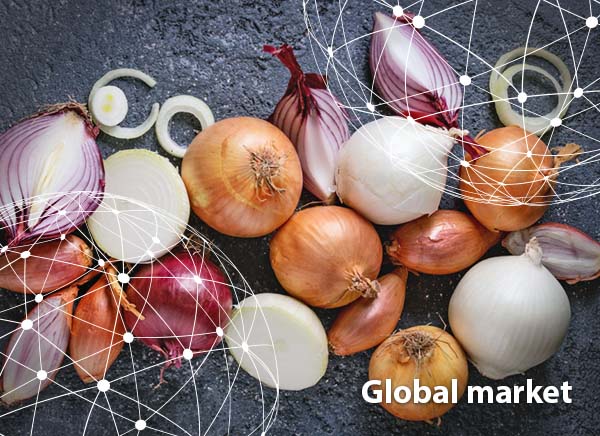 Netherlands: Logistics the limiting factor in Dutch onion export
The Dutch onion export season has picked up steam. "Although, we could export a lot more if we had the transport options. That is the limiting factor at the moment. In other years, the challenge was mainly in sorting, now it is in transporting. This makes the export weeks of +40,000 tonnes that we had last year difficult to achieve. Boats are also loaded conventionally, but that is not possible for all destinations," says an exporter.

"It's not because of the demand, which is fairly broad. Africa is the main driver, but Asia and Central America are also doing well. These are the usual destinations that demand onions. That's good, by the way, because we had to wait quite a long time for that from the second part of last season." According to the exporter, the price of onions is currently moving slightly upwards. "We don't have very high prices, but that can also be explained by the fact that there is a bit more supply than demand. The price of red onions showed a brief shock when a number of packers had to make purchases, but that effect has already ended, they say. "With red onions, the focus is mainly on coarse grading, the demand for the fine grading is a lot less."

"There were a lot of problems in quality, especially with onion sets. We therefore switched as quickly as possible to seed onions, but there too we see a high percentage of failures. Especially the bacterium rot stands out negatively, often as a result of hail or mildew, the bacterium has to have an entrance after all. In the seedlings, this is often still in the outer skirt. So, you have your work cut out for you, but in the end we can serve our customers with good quality. If the ground is not too hard, the growers can choose their own suitable moment for harvest."

UK growers are facing higher costs for fertiliser, energy, transport, and labour. Accordingly, to retain profitability, these costs are being passed onto consumers.

Transport and labour costs in particular have risen in 2021, with restricted travel continuing to impact the flow of migrant labour from Eastern Europe to the UK. The UK imports a vast majority of its onions from Europe. The current shortage of lorry drivers and high shipping costs have made importing from Denmark more expensive, passing on the additional cost to the importer.

The UK is expecting an average yield this year, despite the extreme weather conditions experienced earlier. The first quarter of 2021 was particularly wet, with significant rainfalls in January and February. March was dry, which allowed the planting of onions; however, frosts in April halted plant growth. The weather was better after that, but the quality of the 2021 crop is yet to be fully determined. Demand for onions in the UK has been robust over the last few months, in line with the reopening of the foodservice sector, and retail sales remain strong.

UK onion prices are likely to continue on an upward trend for the remainder of the year, with input costs projected to remain firm.

Italy: High demand and good quality for Italian onions
A major onion producer and trader from northern Italy says that white onions are in high demand because production is slightly down in several European areas. Italian onions are also in demand abroad as they are of high quality this year, thanks to the weather conditions. The yellow onion is a different matter: after a good start in the market, there is not less product, but the average size is smaller. This is causing a certain heaviness in the market. One particular type, the Borettana onion, is experiencing a 20% price drop compared to other years, as there is a lack of demand from the processing industry. Italian shallots are not being exported at the moment as the Netherlands, Belgium and France have had good harvests.

The chairman of the Consortium for the Protection of Margherita White Onion PGI says: "The prolonged period without rain during the harvest has made possible to bring to the markets an onion that is flat, semi-flat and round, beautiful and free of defects. The other positive aspect has been the increase in demand from neighbouring regions. Producer prices were on average 5 euro cents per kilogram higher than in previous seasons. This means that the amount of product sold at retailers (40%) is increasing compared to that sold at wholesale markets (60%).

Spain: Slow exports lead to low prices for Spanish onions, despite good quality
The harvest of late onions continues in Spain and will finish approximately 15 days earlier than usual due to a very mild summer. Around the 15th of October most of the fields will have been already harvested and stored for the rest of the year. The lack of heatwaves this summer has very positively influenced the quality of late varieties while the yields are similar to those from last year.

At the moment, the exports are slow and prices are low, similar to those from last year at the same period and not yet at the pre-pandemic levels. The pressure of the Dutch onions being sold at low prices is having a big influence, as well as the increasing production, year after year, of the German and British productions. The volumes are around 12% bigger this year in Germany, one of the main Spanish onion importers.

The acreage of late varieties in Spain has slightly increased from last year: +3% in Castille-La Mancha, bringing this region to 7,800 hectares; +13% in Castille and Leon, with 859 hectares in total and +20% in Andalusia, which has 1,400 hectares of these varieties. According to the Spanish Ministry of Agriculture, the sector expects a harvest of 770.000 tones of late onions, the ones suitable for exports.

Turkey: Good weather brings good onion yields for Turkey
Onion volumes are up from last year due to good, dry, weather conditions. The quality is better, as onions prefer less humid climates, meaning there have been fewer diseases, and better yield. Onions began to be taken into storage starting the first week of September, with around 30% of the product now in storage. The majority of the storage operations should finish around the end of October. It hasn't rained much so far, but there are some rains showing in the near future. If the rainy weather persists the storage operations may last a little longer. There weren't many problems this year, but some areas were affected by drought. There were water shortages, but the general product is still up in volume. The second major problem was the steep rise of import costs of the materials and fertilizers used. This may have a lifting effect on the prices.

European markets, like Holland, Germany and the UK are the most interesting for Egyptian exporters, but markets like Belgium and France have the traders' attention as well.

South Africa: Weather causes difficulties in South African onion season
It looks to be a difficult onion season, yet another crop affected by the heavy rain and high humidity in January and February in Limpopo Province, which caused some onions to start deteriorating in the fields due to higher pest pressure. Limpopo onion producers planted more onion hectares because of good water availability, however, the large volume of low quality onions on the markets has brought down the price.

This, coupled with lower purchase power in a depressed economy, has dampened the onion market.

The previous onion season in the Western Cape was a very good one and because Cape onion growers are able to plant intermediary onions (because of longer day length than in the northern parts of the country) they are able to store onions for up to 6 months. This overlaps with the Limpopo and Brits (Northwest Province) onion growers’ season, which further contributed to oversupply.

Onion prices have been under pressure for a couple of months now. At the moment they stand at R2.90 (0.16 euro) per kg.

North America: Onion supplies across North America are down somewhat
Throughout the summer, the Pacific Northwest saw heat waves, which hit triple digits for sustained periods of time. One grower/shipper notes that it was primarily heat units that slowed growing down and took the top yield off, meaning the yields will be down somewhat.

Along with affecting those early yields, the heat also sped up the growing season slightly. Harvest is ahead of schedule by several days, says a shipper, and will likely finish sooner.

Overall, across the U.S., onion supplies are anticipated to be offset. While the aforementioned heat was also seen in growing regions such as California and fields in the lower part of New York state received rain, other regions such as New Mexico had a good growing season. Canada is also expected to have a good crop of onions.

That said, demand is solid for onions. The shipper notes that the bigger ones are being asked for such as colossal and jumbos and there are just not as many of those. There are mediums so you have to balance that, he says, noting that foodservice for example is used to those bigger onions so that will be challenging.

Meanwhile on pricing, the slightly lower crop means the market is rising for onions and pricing on red onions has picked up earlier than anticipated. The increased price is needed given the rise in costs of production. Everything is up from the farm to packing them says the shipper.

China: Onion export on verge of stagnation
Only in Gansu is the onion harvest currently at peak season. Gansu is a major onion production area in China. The weather conditions and soil conditions are very well suited to the production of onions. Normally, the period between August and October is the height of the onion harvest and the export season, but this year onion export is on the verge of stagnation.

The volume of overseas orders declined by 50% in the last few months. The main reason for this decline is the high shipping cost. Some exporters had to completely stop exporting onions to distant destinations such as England. The current cost of shipping from Qingdao to Rotterdam is 14,000 USD per container. One container holds 24 tons of onions, which means that the shipping cost is around 600 USD per ton of onions. That is much higher than the product value, which is significantly out of the ordinary.

Domestic demand for Chinese onions within China is still huge. Most of the onions that can not be exported are shifted to the domestic market instead.