Poor weather conditions earlier this year during growing season continue to hamper European production areas, and kiwis are no exception to this. Spanish producers fear they may have up to 45% less production compared to their peak volumes, whilst Italy predicts 60% less. Overseas the picture is more positive, as New Zealand expects another record breaking season, and China looks forward to a good domestic season. Back in Europe the sales of kiwis are going well,  whilst in North America there is good demand, but some shippers fear logistical issues could cause problems later in the season, a problem that has also affected the Chinese market. 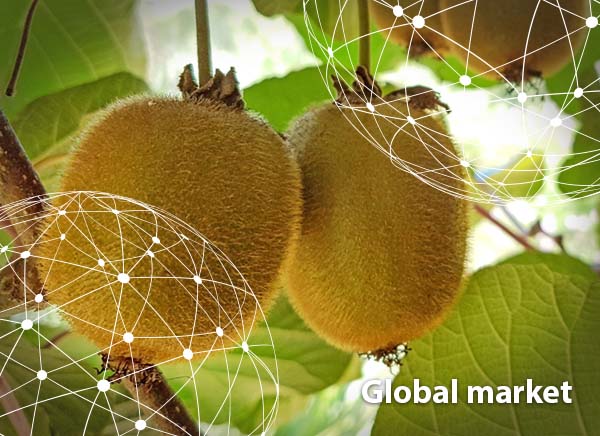 The Netherlands: Kiwis a big hit this summer
The limited availability of other summer fruits ensured that kiwis held their own this summer. Normally, kiwi purchases in summer are below average, but this summer they were even 47% above the average of the past four years, according to AMI figures. Yellow kiwis even increased by as much as 60%. This was not a reaction to the low prices, which were actually relatively high. This month, kiwis are still available from Chile and New Zealand in the Netherlands, before they make way for French and Italian kiwis.

Belgium: Good season expected for kiwis in Belgium
It was a good year for the New Zealand kiwi, according to a Belgian buyer who works mainly with the Zespri kiwi. The price and quality were in good proportion. The season is set to last another five weeks or so before they gradually switch to European cultivation. At the end of the season there are sometimes storage problems, but it looks like the kiwi will hold up well until the start of the European season. Price increase during the season is negligible and was around twenty cents for the period from May to now. The organic share has been stable for years.

Germany: Good prices and quality for kiwis on German market
According to a trader from Munich, green kiwis from New Zealand are currently fetching 28-30 EUR/5 kg on the German market. These kiwis are reimported from the Netherlands. As a standard item, they generally sell around 40 boxes per week on average. Despite some softening towards the end of the season, the quality is reported be very good on the whole. Sales continue to be good, but a little weaker than last year. They also offer organic kiwifruit, of which about 5 to 10 boxes can be marketed per week. Kiwifruit from Spain are again expected for the winter season.

Italy: Decline in production volumes continues for Italian kiwis
Quantities of Italian green kiwifruit have experienced a further decline in 2021, while in Europe as a whole volumes seem to be more stable. As the autumn season approaches, there is no official data yet, but trends are already emerging. A leading trader in the north of Italy says that the production of green kiwifruit in Italy could experience a 10% drop compared to 2020, which was not a good year. This year, the production areas of Piedmont, Veneto and Friuli are recording very serious losses, mostly due to spring frosts. In Romagna, on the other hand, the decline seems to be more contained, while in Lazio it is vine decline that is causing concern.

Five years ago, Italy reached their record production of 600 thousand tons of kiwifruit, while 2021 will probably only see 250 thousand tons, a 60% loss. But in the rest of the northern hemisphere, yields look very different. Greece continues its sprint and production seems to be increasing. Another nation that is far too often overlooked, mainly because there is not much information available about production there, is Iran. Those who have been there, talk about considerable orchards with increasing productions.

As for golden kiwifruit, quantities seem to be increasing in Italy due to new orchards. Yields are constant as all orchards feature protection and anti-frost nets. We are talking about around 80thousand tons.

Spain: Poor weather conditions affect Spanish kiwi production, up to 45% less volume expected
The frosts in Galicia and Asturias, the areas that represent more than 85% of the Spanish kiwi production, face a 45% reduction in the coming kiwi harvest. The low temperatures during the flowering period in Valencia and Catalonia also affected the expected growth and will turn out into a slight decrease in production. The Spanish kiwi producers expect then a harvest of approximately 23.000 tonnes for the 2021/2022 season. Currently, the Spanish kiwi production does not meet the domestic demand and is completed by imports from mainly Italy, France and Greece. However, some of these countries have also suffered the effects of hail storms, frosts and pests, reducing the volumes dramatically. A kiwi shortage is then expected this year in Europe, so traders expect easier sales and an increase of prices for the Spanish production, as happened last year.

Greece: Good season for Greek kiwis
The kiwis in Greece seem to have grown into normal sizes and demand is already going well. Exporters are in the midst of discussing programs with their partners. In terms of markets, the Greek kiwis are exported extensively, with volumes continuing to grow. The fruits find their way to European supermarkets, but Asia and the Americas will also be important markets for the Greek kiwis this year.

South Africa: High hopes for increasing domestic production of kiwifruit
The local kiwi harvest will start in February next year. Kiwi imports are a little bit slower than usual but sales are fairly good, says a kiwi importer. At the moment kiwis are imported from New Zealand until October/November, when it switches over to Europe until April; kiwis are imported all year round.

Locally there’s a buzz around the kiwi industry, it is growing quite well. Imports might reduce to some degree when local volumes increase in coming years. The availability of plant material is a constraint but nurseries are expanding. The areas where kiwifruit can be grown in limited in South Africa.

The arrival quality of the kiwis that South Africa exports is improving every year, says a grower, and there’s a good growth curve in domestic volumes.

The kiwi market is growing in South Africa due to the growing consumption of the fruit, however the local industry lacks many processing opportunities, for instance drying or freezing kiwis, but kiwis do go to the fresh cut sector.

China: Container shortages affect logistics for kiwis
The weather in various producing areas this year is good, and it is shaping up to be a good year for kiwifruit. The kiwi fruit season officially started in early September, it is expected that there will be a good performance this season.

The early-ripening Cuixiang kiwifruit in Shaanxi began to be picked in early September and is currently being distributed on a large scale. There was cold weather in early spring, but it had no effect on the overall yield and quality, and the yield per mu was normal. In terms of price, the cheap green fruit Cuixiang is about 30-40 yuan/box (with 16-20 fruits in it), which has not changed compared with previous years.

The biggest problem exporters facing this season is the cost of transport due to the shortage of containers. The freight from Qingdao Port to Santiago Port is normally around RMB 10,000/container, but by the end of last year it had soared to around RMB 160,000/container.

North America: Supplies of imported kiwi see a slight imbalance.
One U.S. shipper says volumes of kiwi are arriving from both New Zealand and Chile right now. “We’ll probably go with Chile for another four to five weeks and New Zealand until mid to the end of November,” he says.

While the volume out of New Zealand seems to be relatively controlled and similar to last year at this time, the picture out of Chile is slightly different. “From Chile, we have a little bit of an influx of shipments because some shipments were delayed by logistics,” he says. “It seems like two to three weeks were compounded and the end of the season seems to have more volume than we expected.”

On sizing, while New Zealand’s size profile is as expected, Chilean fruit is running slightly smaller though there’s a good mix of sizing available.

Demand is good overall. The New Zealand fruit is moving very well and seeing higher demand compared to last year. As for Chile, because there’s a lot more volume than expected, it’s on the slower side. In general, consumption of kiwis is increasing year over year thanks, in part, to developments such as new varieties such as the SunGold coming into the category.

Where has all of this left pricing? It’s slightly higher than last year but Chile will get an adjustment. It’s already adjusting downwards because of the influx of shipments. There’s no foreseen reduction in prices on Chilean fruit, but that also depends on how much volume will arrive this late into the season.

And then in November, supplies of kiwis will start from Italy and Greece. “Italy will have a supply issue. There was a bit of frost back in May and they lost about 30 to 40 percent, if not more, of the crop. It’s going to be a challenging year out of Italy,” says the shipper. “Greece has also lost a little bit due to weather conditions but it seems to be the same, maybe slightly higher the last year. The challenge out of both countries are the logistics and transportation via ocean carrier. It’s become a very challenging factor these days.”

Oceania: Another record breaking season expected for New Zealand kiwifruit
Zespri remains on track for another record-breaking New Zealand kiwifruit season, with an expected crop of around 177 million trays, despite the industry facing major challenges including COVID-19, labour constraints and shipping disruptions and increased costs. The company says: "Demand remains strong globally from both a volume and value point of view with the high level of Vitamin C in Zespri Kiwifruit remaining an important point of difference for our fruit. We’re now over 70 per cent through this season’s Zespri SunGold Kiwifruit crop, and more than 50 per cent through our Zespri Green Kiwifruit, with markets now commencing their strong post-summer fruit sales marketing campaigns."

Australia's production of kiwifruit is on a much smaller scale, with almost triple the domestic production coming through exports; in the financial year ending 2020, 8,202 tonnes were produced in Australia according to the latest statistics, and at the same time 22,883 tonnes was imported (16,765 tonnes from New Zealand). However, Australia's production did bounce back slightly. In 2018, 9,582 tonnes were produced in Australia, before falling to 7,133 tonnes in 2019, then a 15 per cent increase in volumes in the most recent year. However, the Australian kiwifruit production value was at its highest over the three years in 2020, worth A$26.7million. Australia's peak season runs from March to July, with most of the supply coming out of Victoria.