Demand for the ever-fashionable avocado remains high across the board, with increased demand in countries like Germany where the school holidays have ended. In China in particular, the upwards trend of avocado consumption continues as consumers grow more acquainted with this product, and Australian growers benefit from this, sending out their first ever 40 foot container of fruit up to the Asian market, as well as possibly expecting their largest harvest ever. In European production countries like Italy and Spain however, the avocado production has been hampered by extreme temperatures upwards of 45°C. 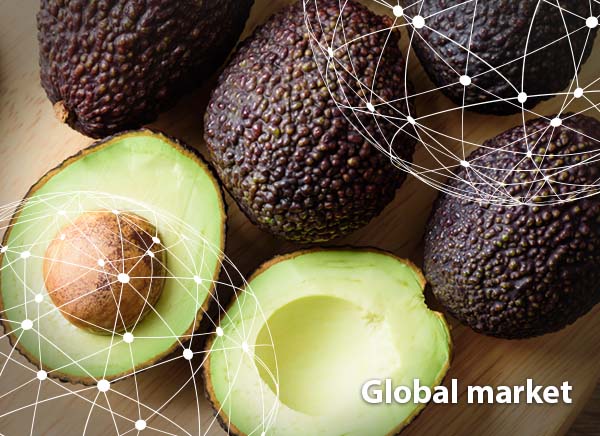 The Netherlands/Belgium: Good demand and prices for smaller sizes of avocados
Kenya continues to ship containers of avocados and will continue to do so until the end of this year. The country is currently exporting many small calibres of Hass. Tanzania has also started to load containers. The demand for small calibres (22 and smaller) is good, because large exporting countries like Peru are actually exporting larger calibres this year. As a result, the price of the smaller sizes will probably rise somewhat and the larger ones will fall. Currently, the price for small calibres is between seven and eight euros. The season will soon start in Chile, Israel and Spain, and the quality and volume of production from those countries will influence the price from September/October.

Germany: Increased demand after the end of the summer vacations
In Germany, there is still a high demand for avocados, partially due to the end of the summer vacations. Currently, avocados from various countries of origin such as Kenya, Peru, South Africa and Colombia can be found on the German market. Kenyan avocados show a slightly lower quality, as they have not always developed satisfactorily in the ripening chambers, reports a major trader.

Peruvian avocados continue to dominate the summer season, which will end in the next two to three weeks. Avocados from Israel, in turn, are not expected until late October with the "Pinkerton" and "Ettinger" varieties or in November with the "Hass" variety.

There may be an artificial shortage of 18-caliber varieties due to various promotions. However, there are still many 14- and 16-caliber grades to be found on the market.

Essentially, 14s and 16s can be purchased for just under 7 euros. Avocados from Kenya, on the other hand, are available for 6.50 euros and 18-caliber for about 7.25 euros. Currently, no unusual conditions or short-term shortages are expected.

Spain: Botryosphaeria and temperatures of over 45 °C threaten Spanish avocado production
In the Iberian Peninsula, taking into account the productions of Spain and Portugal, there are more than 20,000 hectares of avocados, distributed between Malaga, Granada, Cádiz, Huelva, Valencia and southern Portugal. The Iberian avocado sector, whose season runs from December to April, is working not only on the expansion of surface cultivation; also in expanding its marketing window.

Nevertheless, there is a serious problem in nurseries and young plantations with Botryosphaeria, a fungus that affects the vegetative growth of trees. Botryosphaeria manifests itself in the setting areas and rots it, causing the fruit to fall to the ground. This is a factor that is affecting avocado productions of all varieties in a severe way. The other is the temperatures and the climatic extremes that Spain is having and that begin to repeat themselves every year, with temperature rising above 45°C sometimes. These abnormally high temperatures paralyze the growth of the fruit and, in the event of a lack of water, as is happening, the tree weakens and throws the fruit to the ground. The fall of fruits this year is generalized, which means that one more year the harvest forecasts will not be as it was expected, although to date it is estimated that there is a bigger production than last year.

Italy: Low prices on Italian avocado market due to large supply of product
It is too early to make estimates for the 2021/22 Sicilian avocado production campaign. “We expect a slightly later start of the season than last year, due to very low average temperatures in spring. After the fears linked to the 46 °C reached at the turn of July and August, temperatures now seem to have stabilised," says a Sicilian entrepreneur. "The trees are full, but it won't be a superlative year like the previous one, when 1,400 tonnes of product were produced.”

A wholesaler from Milan adds: “As for Peruvian Hass avocados, we have seen a drop in prices, due to a large supply of product. The import season in Italy started at the end of April/beginning of May and will likely end in a few weeks. While Hass avocados are usually bought for no less than EUR 10.00, prices now stand at EUR 5.00. Foreign markets, such as the Netherlands, with the greenskin avocado have had good luck. The product has been very successful, not least because of the limited quantities available. Those who marketed varieties such as Pinkerton, Fuerte and Ryan from South Africa and Peru recorded prices of 12.00-13.00 Euro.”

South Africa: Prices for Fuerte almost twice those of Hass
Prices were good on the early European market before Peru’s avocados arrived, but thereafter the export market was a difficult one for South African exporters. Exports are now picking up again from the late regions as Peru’s volumes subside; farmers in these areas let their fruit remain on the trees to wait for better market conditions.

South African avocados could still arrive in Europe until week 46.

The crop volumes are similar to last year, around 16 million 4kg cartons, lower than the expectation when the season started, given the good summer rains production regions had had.

A local trader notes that on the volumes for the domestic market, Fuerte quality wasn’t as good as last year and that there has been wind damage. He did note that quality on Eswatini (formerly Swaziland) avocados has been very good.

On the local market the average avocado price is R16.06 (0.9 euro) per kilogram. A trader on the Johannesburg municipal market floor says Fuerte prices are close to record levels for this time of the year and has been strong for a month at R110 (6.2 euro) and R130 (7.3 euro) for a 4kg carton, while Hass is almost half that at R60 to R70 per 4kg carton.

Hass is always somewhat less expensive than Fuerte – unlike most other places in the world – but this year the discrepancy is particularly large. A lot of the small sized Hass fruit go towards the processing sector (guacamole for export, for instance), which is exerting a strong pull on Hass volumes.

China: Increasing interest in avocados from Chinese consumers, imports up 27%
Avocados have become quite fashionable in recent years and they can be found on the tables of many Chinese consumers. A growing number of people is now familiar with the fruit and have started adding the fruit to their diet.

Recently, Prohass announced their latest statistics mentioning that the country expects to import around 467,000 tons of avocados in the 2021 season, which is 27% more than in the previous season. Peru has already become the largest supplier of avocados to the Chinese market with a very stable supply and the high-quality product.

North America: Smaller fruits but larger demand for avocados on North American market
As growing regions wind down for their avocado seasons, the focus will turn to sizing and pricing of avocados.

Domestically, California is slowly wrapping up its avocado production. “They’re about 95-96 percent done with the estimate,” says a Californian importer. “We’ve got about three to four weeks left.” This week, projections are for 6-7 million lbs. of fruit to move and then next week, 5 million and continuous weekly tapering down from there.

Offshore, Peru is in the same position. “There are about three to four weeks left there as well. So within a month, Mexico will be the only game in town,” the importer states.

That said, it’s a different year for Mexico than last season. The fruit on the trees are a lot smaller this year for a few reasons. Last year’s crop was really heavy. The weather in Mexico has been a huge factor as well. It is the rainy season but they need the sunshine for the fruit to grow and they haven’t had the heat yet, according to reports.

He adds that generally the demand for size 48s is approximately 34 percent of the industry and the pack outs right now are only running at about 18 percent. “It’s basically depleting industry inventory now and within two weeks, there are no options. It’s either take a smaller size or you’re not going to have product,” he says, noting that this is the biggest challenge right now--getting the industry to accept the smaller sizing.

Meanwhile demand has been fairly strong for avocados and hovering in the low 50 million lbs./week. “We got as high as close to 60 million lbs. but even with the price, demand is surprisingly and relatively high.”

Indeed, pricing has seen a fair amount of volatility within the last three to four months. Right now 48s are at about $65, 60s at about $50 and 70s at $30. There’s a huge price difference right now which may force people into those smaller sizes.

However, prices are likely to strengthen when Mexico becomes the sole supplying country. “In a few weeks, we could see upward of $80 for 48s and I wouldn’t be surprised if we saw 60s in the $60-$65 and 70s closer to $40,” the importer continues. “The hard part for the packers is they’re paying 65-70 pesos/kilo and with such a small pack out on the 48s and 60s, they have to raise that price. It’s not working for their price model. We’re projecting that three weeks from now when Mexico is in control that we may see 80-85 pesos/kilo which is going to keep prices high.”

He does add that sizing will catch up on avocados but that’s still likely four to five weeks away. “We may be dealing with the size issue for the next month to two months. They need to catch up and until that happens, I don’t see any price relief in sight.”

Australia: High expectations for what could be the biggest Australian avocado crop ever
According to statistics, a total of 423,281 trays of avocados were dispatched for the week ending July 9, which was a 23 per cent increase on the previous week and seven per cent higher than the forecasted 396,431 trays. North Queensland supplied the majority of the fruit at 52 per cent, followed by Central Queensland at 39 per cent. Consumers have enjoyed low prices at a retail level over the past few weeks, with supermarkets and grocers dropping prices of Hass avocados to between $1-2 each.

A major Australian avocado producer reported they are expecting some of the biggest avocado crops that the country has ever produced in 2021, which will lead to more opportunities both domestically and internationally. According to an industry representative: "In the last two months we packed an Australian first 40-foot sea container for Singapore. Australia has done a lot of 20-foot containers in the past, and even this season there have been a few heading up to Asia (from another company), but we have never moved into the big game, which is the 40-foot containers of fruit heading up. Price has been something that has been a factor in the past 10 years in getting new customers into the mix, so when supply is abundant, we have the opportunity to get more consumers into the product as well."

He added that weather has been surprisingly good across the growing regions; there is probably only one, Central NSW, that had too much rain, but everyone else has had good weather, so size and volume is up."