In Spain, South Africa and China, adverse weather conditions during the growing seasons have severely limited the production of lemons, with up to 40% losses in the Chinese production due to frost damage. In Turkey, however, the weather has benefited the lemon crop instead, whilst in the US the re-opening of the catering sector has boosted sales across the country. 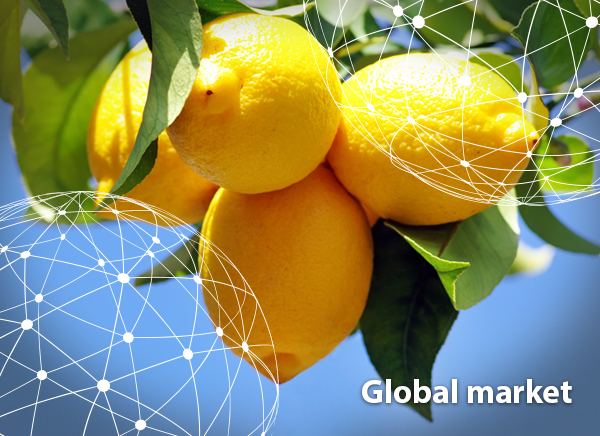 The Netherlands: Strong start to overseas seasons
"The overseas lemon market has started strongly. The early end of the Verna season has created a stronger demand for overseas lemons. In addition, volumes from Argentina to Europe are lower than last year. The prices are therefore currently a lot higher than last year," according to a Dutch importer.

Spain: Production expected to decline by almost a quarter due to weather
Spain will continue to be the leading exporter of fresh lemons and the second most important processor of lemon juice, essential oil, and dehydrated peel, worldwide, in the 2021/2022 campaign. However, after a record harvest year, Spanish lemon production is expected to decline by 23% due to adverse weather conditions in 2021.

The first forecast of the lemon harvest for next season estimates that production will total 1,035,000 tons. This figure represents a considerable reduction compared to the record 1,340,000-ton production expected for the 2020/2021 campaign, according to the provisional balance.

The production of the Fino lemon variety is expected to decrease by 16% and stand at 820,000 tons. The Verna lemon is expected to yield 215,000 tons in 2022, 40% less volume than in the current 2021 campaign. The production is expected to drop due to adverse weather conditions in 2021 with episodes of cold, wind, and excess rain that affected flowering and fruit setting in some production areas. With this drop in production, there should be a recovery in prices paid to producers that will have to be transferred to the rest of the links in the chain to achieve a correct price balance.

The beginning of the season in September could be marked by the end of the lemons from the southern hemisphere and the lemon season from Turkey, which may return to normal harvest volumes. A greater amount of lemon will be directed to the fresh market and there will be a decrease in shipments to the processing industry, which achieved a record volume in the 2020-2021 campaign, returning to values close to 25% of average processed fruit in recent years, in a scenario of very active international supply of juice and oil where the Spanish industry will have to try to remain competitive.

The effect of the progressive entry into production of the new farms in its forecast, with 5.4 million lemon trees planted in the last six years, which, will be reflected in the harvest of the coming years, should also be taken into consideration.

Turkey: Better weather benefits Turkish lemon season
The weather has been much better than last year, as there have been many fewer flash frosts and flash heat waves. As a result, Turkey will have a healthier crop with more crop volume than last year. Turkey's first lemons, of the variety Meyer, will start exports on 20 August, as announced by the government. This year, the crop volume is expected to be big and sizes to be medium, for both Meyer and Interdonato lemons. For the Interdonato lemon season Turkey is expected to start towards the end of September.

South Africa: Better season than expected for South African lemons
The South African lemon estimate is 10% down from the original estimate made for the season; as it is now expected to be 27 million 15kg equivalent cartons, of which most have been packed and inspected for export, with 22 million cartons having already been shipped by the end of week 30.

It is mostly Eastern Cape lemons that are being packed, with a bit still to come from the Western Cape. Drought in the Eastern Cape, the region which produces most of South Africa’s lemons, has resulted in smaller fruit, and won’t reach its initial export estimate of 16.396 million 15 kg equivalent cartons.

Logistics are taxing exporters, for instance weather-related downtime at Port Elizabeth, Ngqura and Cape Town container terminals and congestion in the aftermath of the cyber attack following the civil unrest, particularly in Durban.

The European lemon market was under a lot of pressure at the start of the season, especially with large volumes of Spanish fruit still on the markets, but, an exporter says, the market started pulling Southern Hemisphere supplies earlier because of the low quality of late Spanish lemons and prices started rising.

Prices are weaker than last year, but, as a trader optimistically notes, it is better than they had initially expected. On the domestic market lemons are trading at between R4 (0.23 euro) and R5 (0.29 euro) per kilogram at the moment.

China: Significantly lower volume of Chinese lemons expected due to frost damage
The new season of Chinese lemons is set to start in September. Production areas suffered from cold temperatures in February this year and some of the lemons have been damaged by frost. The production volume is likely to be 30%-40% smaller this year.

At the moment, the market price of old season lemons is not particularly bad. But domestic retailers are able to make some profit when selling in local market only. There are barely any purchase orders from overseas. Firstly, the export price of Chinese lemons is high compared to lemons from other production areas. The price of Chinese lemons is even twice as high as the price of Turkish lemons. Secondly, the shipping price is extremely high and shows no sign of coming down.

North America: Return of foodservice helps push lemon pricing up
Lemon supplies in North America are currently good, though pricing and freight rates are influencing where they’re being pulled from.

A distributor from San Antonio, TX, was receiving lemons from California until the first part of July. “That’s when the supplies were low and the pricing was jumping up,” they stated, noting that the recent heat wave in the state was also affecting the lemons.

Currently, they are receiving offshore lemons because the value works out better. “They’re Argentinian and Chilean lemons and it was a considerably better buy. I can use non-domestic lemons at this time and the quality is good. It’s better value even with the freight differential. Even coming off the ports on the East Coast, it costs a lot less than the freight from the West Coast.” They note that they will likely stay with offshore supplies for the next two to three weeks.

However, Mexico will start with its lemon crop in two weeks. “There were some off-bloom lemons available and right now they’re going to peak on 200 sizes,” the distributor continues. “But they say the crop is going to be good and that sizing on lemons will improve as the season goes on.”

This is largely related to what is happening in the lime market which saw a recent significant increase in prices. “So they’re going to focus on picking limes so the lemons will get bigger,” they say.

For this San Antonio based company, its proximity to Mexico means the country is a significant supplier of lemons for it, particularly when freight rates are an issue. “The freight rates have been insane-- up by 40 to 55 percent.”

Meanwhile demand has been strong for lemons. The return of foodservice particularly benefits the citrus fruit, which is a popular foodservice item. The distributor also notes that the foodservice demand is also contributing to the low California supplies.

So, not surprisingly, pricing on lemons is strong currently. “I think if foodservice keeps pulling like it is, pricing will continue to be strong on lemons,” they conclude.